the bugcast 163 – The One With The Stonkin’ Music

No Bugs, because of bugs 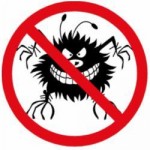 Like the image suggests, there will be no Bugcast this week due to a general feeling of unwellness within the Bugcastle.

We’re all feeling extremely crappy, and we wouldn’t be doing you any justice by forcing ourselves to croak out a show.

However, rather than leave it until next Friday, we may well push a show out during the early part of next week, where we can include details of the Matt Stevens gig on Saturday evening, amongst other less-interesting stuff.