A short journey into the minds of the presenters of this fine podcast.

Dave has been in the audio industry in many forms for many years having been involved in the production of shows for hospital radio. His father also ran a famous audio/visual studio in Woking, Surrey for a number of years, so the industry is very much in Dave’s veins. He started The Bugcast, initially on his own, in March 2008 to prove that he could do it after being inspired by a couple of friends who were also podcasting at the time. He is now involved with a number of other podcasts in the music and technical arenas, and is also testing the waters as a voice artist. When Dave isn’t podcasting, he’s a musician and web developer as well as being employed full-time as a database administrator and developer. 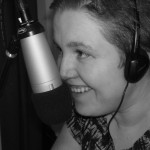 Caroline officially entered the podcasting world in 2009, after having been a fairly major distraction to her husband, Dave, whilst he was presenting The Bugcast as a solo effort. The introduction of Caroline into The Bugcast totally changed the dynamic of the show – for the better – as she is presenting her own musical tastes as well as her opinions into the mix. Outside of podcasting, Caroline is both an artist and writer with a number of books in progress.

About Jingles Milestone shows The Presenters The studio History Credits