the bugcast 472 – The Canadian Invasion 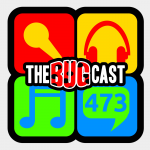 This week on The Bugcast: Dave and Caroline return with some departure news, Podcrawl round-ups, and their usual selection of 8 amazing tracks of independent and Creative Commons music!