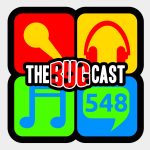 This week on The Bugcast: we reflect on the mess that is the UK currently, the perils of an online footprint, and play 8 tracks of Creative Commons music!

The State of the United Kingdom
BBC News: Theresa May survives no confidence vote
BBC News: Boxer Tom Bell dies in Doncaster pub shooting
Runner’s World: This Runner Is a Hitman. His GPS Watch Tied Him to a Mob Boss Murder

Submit your tracks for the Listeners Choice episode 550 on Friday 1 February 2019!
You can submit any track played between episode 505 and episode 549.