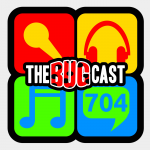 This week on The Bugcast: Caroline updates on her skin and her Fitbit, a true crime series on Netflix, and 8 tracks of amazing Creative Commons music.