the bugcast 328 – We’re going on a Summer Holiday

the bugcast 327 – Invasion of the Little People 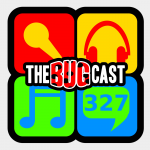 This week on The Bugcast: We discuss social media, we get invaded by the girls, and we play 8 cracking tracks of independent and Creative Commons music!

BBC News: Diaspora social network cannot stop IS posts
Is the reputation of decentralised social networks being tarnished by the actions of extremist activists?

The artists for allowing us to play their music.
Everyone who joined us in the chat room for the live broadcast of this show.
Internet Archive for hosting the podcast files
Ubuntu UK Podcast for the use of their Icecast server
Euterpia Radio for the use of their Shoutcast server
World Wide Indie Radio for relaying the live stream on their own service
Love Leeds Radio for replaying the show on their station