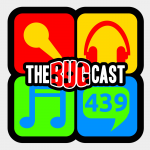 This week on The Bugcast: Dave and Caroline return for a week, but bring news of death and despair, and 8 amazing tracks of Creative Commons music!