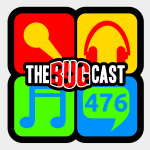 This week on The Bugcast: we discuss new app and podcast discoveries, orange outakes, and we play 8 amazing tracks of Creative Commons music!