the bugcast 480 – Dotard vs Rocket Man 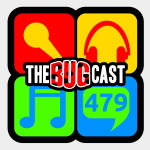 This week on The Bugcast: another UK terror incident and political nose-poking, and 8 amazing tracks of Creative Commons music!