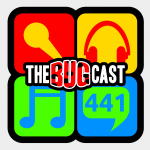 This week on The Bugcast: Dave and Caroline are back for their Christmas episode, with no Christmas songs in sight, but instead 8 amazing tracks of Creative Commons music!