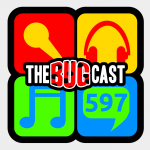 This week on The Bugcast: a news-heavy episode – including: UK politics, poverty shame, technology, sadness, and Trek! – plus 8 tracks of amazing Creative Commons music!

Star Trek:Picard starts on 23 January in North America on CBS All Access, and on 24 January in the rest of the world on Prime Video
Tea, Earl Grey, Hot! – Caroline will be joining Dave and Yannick to review the first episode of Picard

Submit your favourite tracks we’ve played since episode 553 for the Listener’s Choice episode 600 at the beginning of February 2020.