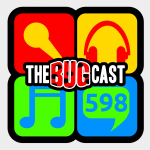 This week on The Bugcast: we say farewell to Monty Python comedy legend, Terry Jones, and play you eight pieces of amazing Creative Commons music!

Tea, Earl Grey, Hot! – Caroline will be joining Dave and Yannick to review the first episode of Picard.
The review of “Remembrance” will be published on the weekend of Saturday 1 February

Submit your favourite tracks we’ve played since episode 553 for the Listener’s Choice episode 600 at the beginning of February 2020.
Deadline for submissions: Wednesday 5 February at 20:00 UTC